Every year during the month of December, Buddy highlights the Twelve Days of Fearlessness. Whether it is getting up the nerve to lace up your old ice skates with your five-year-old or conquering a halfpipe like your teenage days, fearlessness is not just situational for all- for some, it is a way of life.

The moral of this story is to not go for a pump fake. Sure, blocking a shot seems like a great way to show defensive dominance, but once you’re airborne, most of your decision-making ability is out the window. That’s what happened to me a few years ago.

I wasn’t even planning on playing basketball that night, but when my wife got home and encouraged me to burn off a little steam and get some exercise, I thought “why not?” The local community center runs adult pickup games on Thursday nights, mostly 30+-year-olds like me who just want to sweat a bit, enjoy competing, but aren’t going out there to dominate the hardwood. It’s a friendly game.

3 minutes into my first game, barely even warm yet, I was on defense and the ball got behind me. I turn to see a guy about my size take a dribble toward the basket and make a move to go up for a layup. "Not in my house," all 5’10” of me thought. I took a quick step and jumped to contest the shot. I at least wanted to get a hand in his face, no uncontested shots should ever happen, especially in the paint. I have a decent vertical for what I have to work with, and long arms, so I felt confident this was the right move to make. Of course, his feet never left the ground and when he saw me leave my feet, he dipped a bit (a lot) and over I went. Not my first tumble on the court; you don’t get to be as average at playing basketball as I am without taking a couple falls, but this one was different. When I went over him, I went upside down and instinctively put my hands out to keep from falling on my head. Unfortunately, my entire weight of 145 lbs came down on the bottom of my left palm. The pain was immediate and blinding. I cradled my arm and slid myself off the court. The game stopped, 2 people ran over to check on me and see what happened, and another ran to get ice. It was just a sprain as far as I was concerned. It ended my night of play, but nothing I was worried about shaking off in a day or 2.

That day or 2 turned into nearly 10 (a mistake on my part to let it go that far, please reader, never do that!). I could move my fingers with no real problems, but any wrist motion and the pain started anew. To top it off, my forearm had begun to change color from purple to yellow. I’m no doctor, but that isn’t what you want. Off to urgent care I went, hard-headedly thinking this was still a sprain. The X-Ray disagreed. It was a break, but they couldn’t tell how bad, so next, I saw an orthopedic specialist. It was bad. It wasn’t “a” break, it was 4 breaks, all around my wrist. More than that, my delay to seek medical care meant it had started healing in a way the doctor wasn’t confident in and I needed to have surgery within the next couple days to sort it out or risk serious long term injury. 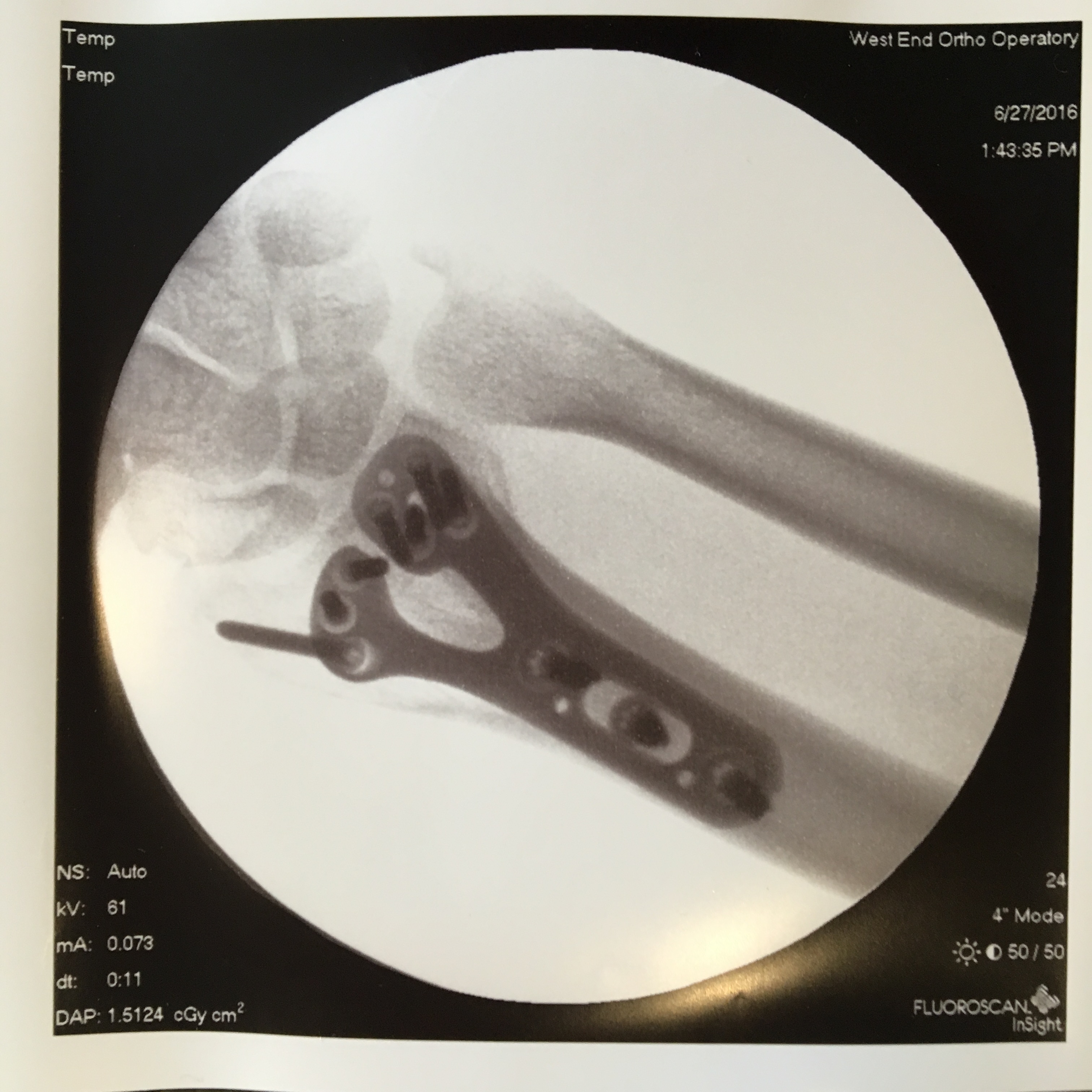 Fast forward those next couple of days, and the surgery was complete. After $1,400 out-of-pocket, I now have a titanium plate in my wrist, 9 screws, a pin, and one heck of a scar. It took about an hour to put all that in my wrist and sew it back up. That was the easy part, believe it or not. The next 6 months included bi-weekly physical therapy (PT), and that really hurt. If I didn’t do the PT, my wrist would stiffen and throb, and if I pushed too hard, it would set me back, because I wasn’t giving my injury time to recover from the previous session. It was a tight-rope act including 30 minutes a day of making weird hand gestures, bending and twisting large rubber tubes, and occasionally horribly throwing little magnetic darts at a tiny dartboard. During most of this time, I couldn’t play basketball for obvious reasons. As I got near the end of the PT, I was able to start dribbling and shooting around, but I was still very hesitant to play again, the recovery still fresh in my mind. And then one day it dawned on me if I was too afraid to go back out and play, then what was the point of recovery? 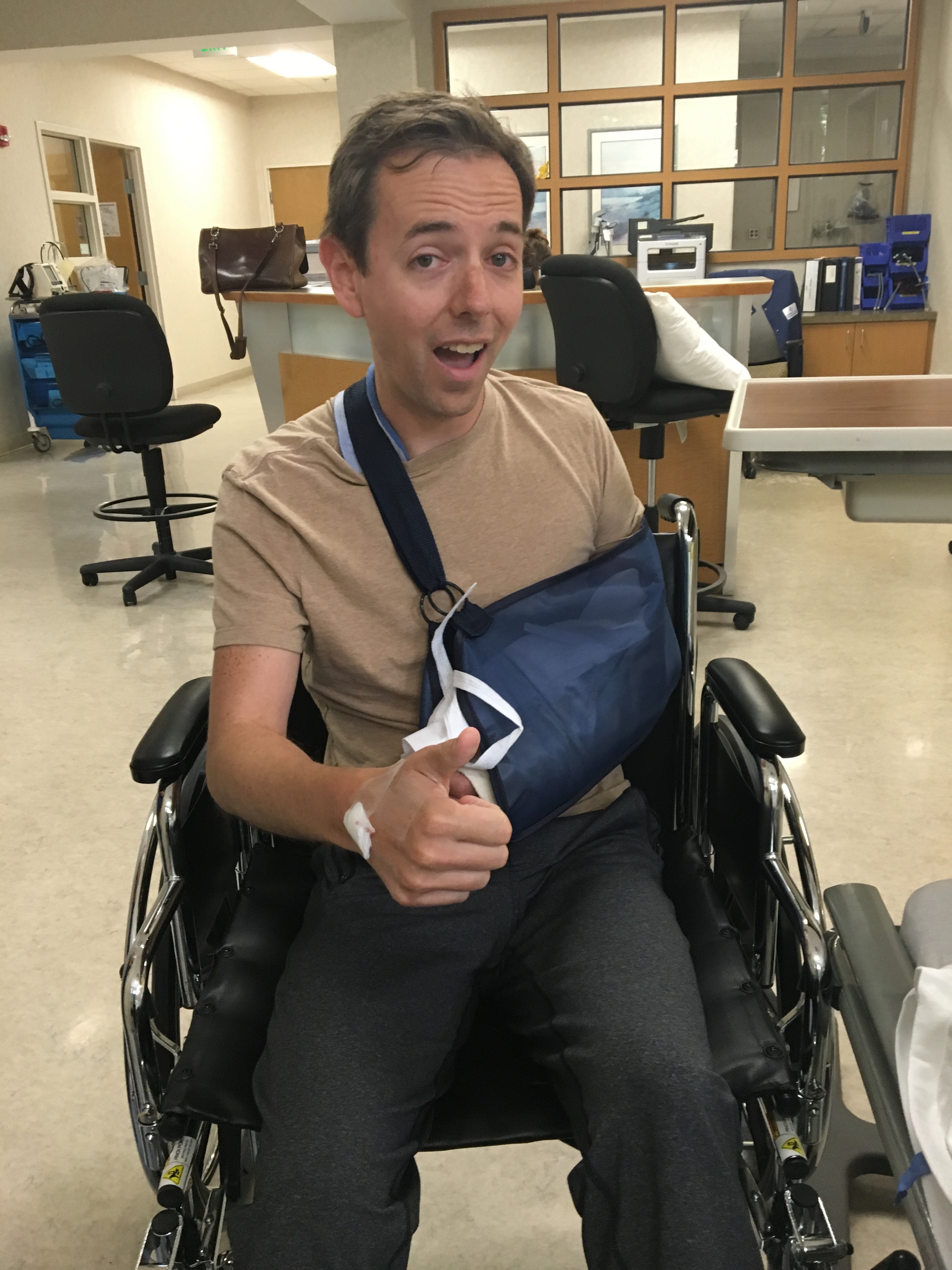 I was still very guarded about my wrist for nearly a year after recovering, but I was getting back out there. First playing 1-on-1, then getting back into full-court games. I love basketball, always have, and a not-so-little injury isn’t going to change that or stop me from playing. I might get injured again in the future, but I promise I’m not going for another pump fake.

Facing criticism can be tough sometimes, but it's a necessary part of growth. David Vogeleer offers some tips on how to take that fearless feedback with grace.

Day 7 - Choosing Which Fear to Face

During the month of December, Buddy will highlight, the Twelve Days of Fearlessness. Whether it is getting up the nerve to lace up your old…

Fear can happen at any time, even after you've taken the risk. Read how one of our co-founders learned to control the fear after a costly mistake.